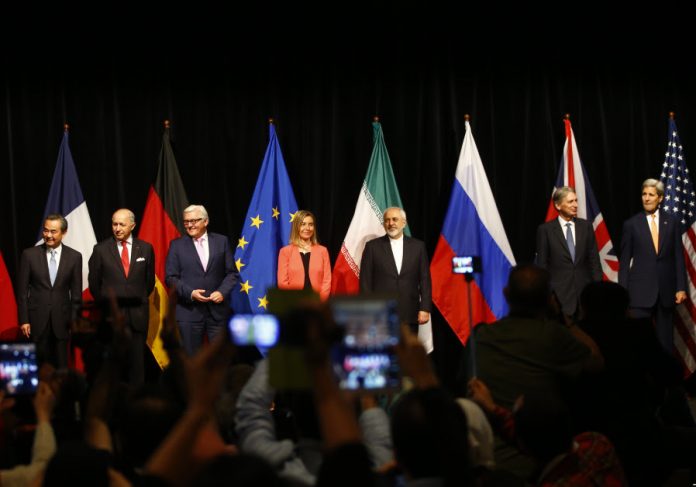 When it comes to Israeli interests – these days Israel is in command not Donald Trump.  His love for his daughter overwhelms any rationale!  Anything else is besides the point of discussion!
Now, these said, I personally have no trust in this deal and I view the president’s move as courageous, at least to say – the accepted notion that the Iranian deal is better than no deal, is contrary to the world history lessons – not only on Jews but especially, and the most recent history of the Iranians after the Shah.  Iran is a staunch supporter of terrorism and Islamization of western civilization and will stop at nothing – absolutely and categorically nothing, fighting Israel right to existence in the Middle East!  There’s no such thing as good guys and bad guys here, there’s only a predator and a prey!
Enjoy :))
UK, FRANCE AND GERMANY WARN CONGRESS AGAINST ‘UNDERMINING’ IRAN DEAL
Representatives pose after Iran and six major world powers reached a nuclear deal, capping more than a decade of on-off negotiations, July 14, 2015. (photo credit:REUTERS)
World powers respond to US President Donald Trump’s decision not to recertify the nuclear deal with Tehran.
Three European powers party to a nuclear deal with Iran expressed „concern” with US President Donald Trump’s speech on the agreement on Friday, in which he threatened to „terminate” the accord unilaterally.

The three US allies– Britain, France and Germany– cautioned Trump and the US Congress from walking down a dangerous path by „taking any steps that might undermine the JCPOA, such as re-imposing sanctions on Iran lifted under the agreement.”

The JCPOA refers to the Joint Comprehensive Plan of Action, the formal name of the nuclear agreement.

Trump is asking Congress to pass „trigger” legislation that would effectively snap back sanctions on Iran for behavior that was not, to his satisfaction, adequately addressed in the original nuclear agreement.

„We, the Leaders of France, Germany and the United Kingdom take note of President Trump’s decision not to recertify Iran’s compliance with the Joint Comprehensive Plan of Action to Congress and are concerned by the possible implications,” the three nations said in a statement.

„We encourage the US administration and Congress to consider the implications to the security of the US and its allies,” they continued, while adding that they share the administration’s concerns with Iran’s ballistic missile activity and support for Shia Islamist extremist organizations regionwide.