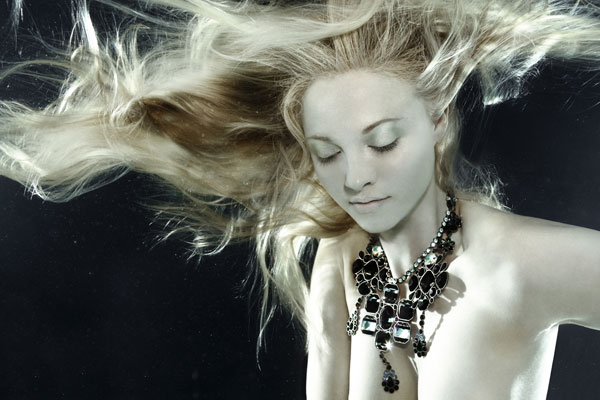 A 20-foot-deep tank, 200,000 gallons of water, five hours to set up, and eight hours to photograph beautiful gowns by the likes of Elie Saab and Oscar de la Renta. Zena Holloway’s fashion shoots will often be an unusual adventure for her models, who have to pose while holding their breath underwater and taking silent direction. The resulting images transport viewers into a world where beautiful creatures are suspended in time and space.

Telling a surreal story
Internationally acclaimed for her poetic works, Holloway started somewhat traditionally. Having received an inexpensive underwater camera as an 18th-birthday present while she was working as a scuba dive guide in Egypt, Holloway taught herself some basics and started shooting sea life before moving on to taking souvenir photos for tourists.

Determined to make a career combining these twin passions, she worked in the film industry in London for a while before getting her first professional commission for Fabergé. The image she conceived, of a model looking in a mirror while picturing himself under the sea, combined the surreal with underwater photography, something that has become a hallmark of Holloway’s work.

“When you shoot underwater you become a vessel for telling stories differently,” says Holloway. “Often you get things out of people—an expression, a gesture—you would not get on land, which I find quite interesting.”

„When you shoot underwater you often you get things out of people—an expression, a gesture—you would not get on land”

Immersed in an underwater world
Though she has undertaken some shoots in the open sea, Bahrain-born, London-raised Holloway more often creates her dream worlds in the controlled environment of a pool, and she chooses not to use scuba diving gear, preferring instead to hold her breath in sync with her models.

Editing plays an important role in the final image, and this sometimes means all indications the model is floating underwater (bubbles, shafts of light, the water surface) are removed to create an even more disquieting world. “People look at the image and can’t quite process it—they are not sure what they are looking at. And I like that,” she says.

Respect for the oceans
As a fine-art photographer, Holloway wants to use her work to promote environmental agendas. For her latest series, Flowers for Jeju: The Last Mermaids, she captures the disappearing way of life of the haenyeo, the free-diving women who harvest seafood from the waters around South Korea’s Jeju Island.

Today, most haenyeo are into their later years, but Holloway prefers to portray them as they once were: young and free.