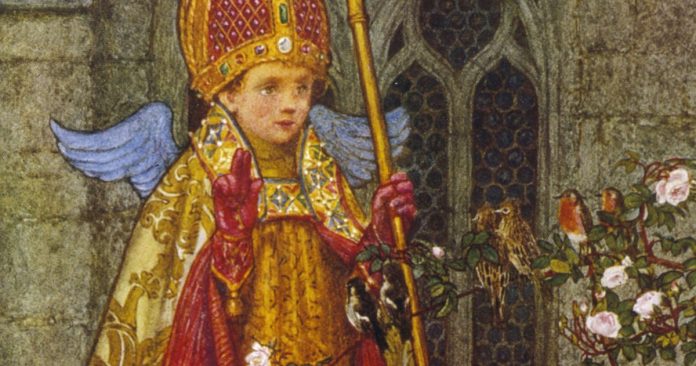 The notion of love is singular and complicated. Being in love is perhaps the most intimate and subjective experience a person can have, yet it’s marked by omnipresent and common rituals—kissing, holding hands, marriage, exchanging gifts, living together, and so forth.

This is especially apparent on February 14, when we give and receive Valentines but rarely give thought to the historical symbolic connotations of such gestures. This year, while making plans to celebrate, consider the dark history and global traditions behind the day of love.

The history of Valentine’s Day is—due to a lack of written historical documentation—a bit murky and multifaceted. There are at least three saints for whom the day may be named—each with the name Valentine, and each, bizarrely, believed to have been martyred on February 14: One a priest in Rome, another a bishop in Terni, Italy, and a third contender believed to have lived in Africa.

The holiday is rooted in Paganism. The Ancient Romans celebrated the feast of Lupercalia, which historically involved games of sacrifice and matchmaking, from February 13 to February 15. We likely derive the name of our holiday from other allegories of Ancient Rome history—it was the Roman Emperor Claudius II who martyred two Valentines.

According to some, Claudius II created a law that prohibited young men in Rome from marrying and getting engaged, as it was believed that unmarried men made better soldiers. However, it’s said that a Roman priest named Valentine continued to perform marriage ceremonies secretly. This eventually led to his death.

Another legend has it that Valentine, while in prison, fell in love with the daughter of the jailer. Before he was sent to death, he allegedly sent her a letter that put into words his love for her and which was signed, “from your Valentine” a line that, of course, stuck.

The third story is one of religious love rather than romantic love: This Valentine was martyred for refusing to renounce his religion.

In 1969, the Catholic Church revised its calendar, removing nearly 100 celebrations of saints whose historical origins were questionable—St. Valentine was one such saint.

However, the day of love is still celebrated with strange, marked traditions.

In South Africa, in a seeming nod to Lupercalia, people literalize the concept of “wearing your heart on your sleeve” by pinning the names of their sweethearts on their shirtsleeves. In Denmark and Norway, people write and exchange Gaekkebrev, or poems and love notes, which are sent anonymously. The only hint given to decode the sender of the poem is the number of letters in the name as signified by dots. In Slovenia, it’s believed that birds propose to and marry one another on Valentine’s Day—and so Slovenians are sometimes told to walk barefoot through the fields to witness the event. In England, women would once pin to their pillows five bay leaves so that, they believed, they’d dream of their future husbands. In Taiwan, people exchange bouquets of flowers. The number of flowers in their arrangements hold varied symbolic meanings, such as fondness, loyalty, and eternal marriage. In Japan, gender roles are reversed on the holiday—women often make chocolates and gifts and give them to their partners. The Welsh carve wooden “lovespoons,” into intricate symbols that symbolize the keys to one’s heart—the tradition dates back to the 17th century. ■