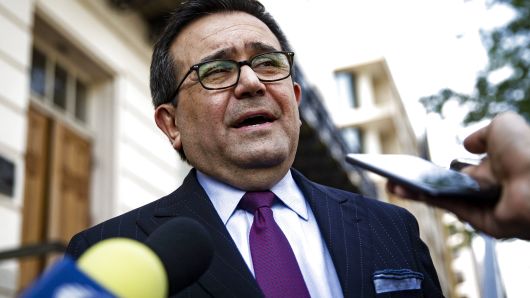 The U.S. is near an informal NAFTA deal with Mexico, though a Mexican official said all three sides would need to be present on a handshake.

The U.S. Trade Representative office is saying there is no deal yet, however, and there are still major issues to work through. But a Mexican official said the issues could be worked out within hours. Negotiators had hoped to seal up an agreement by the end of the week.

There is hedged optimism on that front. Mexico’s economy minister said all three sides — Mexico, the U.S. and Canada — would need to be present for even a handshake deal.

Canada would reenter the negotiations and have about a week to reach a tri-lateral deal in order to get it signed before Mexico’s political leadership turns over on December 1.

Politico reported on Tuesday the Trump administration is planning to announce it has achieved a breakthrough in its NAFTA negotiations with Mexico, citing three sources close to the talks.

Politico said government officials plan to announce the two sides have made progress and Trump is expected to attend Thursday’s event. One source called the announcement a „handshake” deal, according to the media outlet.

One source familiar with the situation told CNBC Tuesday’s news about President Trump’s former lawyer, Michael Cohen, may throw the timing off of any trade announcement because it was a „major distraction.” Cohen plead guilty to eight counts related to tax fraud, excessive campaign contributions, making false statements to a financial institution, and unlawful corporate contributions.

Trump economic advisor Kevin Hassett told CNBC earlier this weekthe U.S. was near a deal with Mexico on NAFTA.

„We’re even closer” to reaching a trade deal with Mexico after Mexican negotiators were in Washington for most of last week, he said Monday.

One of the trade advisors for incoming Mexican President Andres Manuel Lopez Obrador told reporters on Tuesday the goal was still for a deal by the end of the week.

The Mexican peso gained vs. the U.S. dollar after the report.