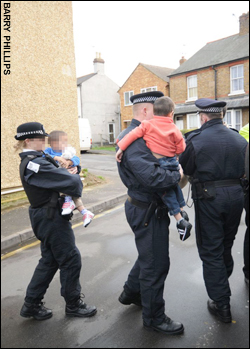 Romania has the highest rate of organized crime in the European Union. In 2013, 57% of the victims of trafficking networks identified in the EU were Romanian citizens, and in 2015 the number went up to 6.101 (40% of all victims).

After almost 9 years of trial, the Romanian justice system has failed to those enslaved by what Europol had labelled as ‘one of the largest human trafficking rings in Europe’.

The Tandarei network, a Romanian Roma organised crime group that was trafficking and exploiting children from the Romanian Roma community, has trafficked 1,087 children out of Romania. In the United Kingdom the Operation Caddy conducted by the UK team with the support of local social services resulted in the arrest of 34 people for a variety of crimes, as well as in the recovery of over 200 items of stolen property, substantial cash seizures and large amount of documentation finding.

According to Bernie Gravett’s (former Superintendent & Coordinator of the international operation in this case) report for the International Parliamentary Union, within the Operation Golf, the first EU Joint Investigation Team tackling human trafficking, in order to prove the exploitation of the children and families in the UK, the UK team has supplied the Romanian team with extensive evidence. They have provided full list of criminal convictions and circumstances for the 168 children identified as being active in the UK, full details, including statements, of all contact by Police with the 168 children and families (stops, verbal warnings, intelligence reports, etc), evidential product and statements surrounding money transfers via MSB’s UK-Romania for the principle suspects, evidenced details of all appropriate adults appearing for the children who have been arrested for crime in London.

After the extensive evidential package provided by the UK team, The Romanian authorities have charged 26 gang members and since then until the present moment they have remained on trial in Romania on charges of trafficking children into the UK for the purpose of forced criminality, money laundering, membership of a criminal gang and, in some cases, firearms offences. No further developments took place in the case, by the end of January 2019 52 court hearings being postponed.

On February 12, the court decided to acquit the 26 offenders that were being prosecuted in Romania and to lift the seizing order applicable to their goods and assets. According to the Romanian law, the prosecutor can appeal the court decision in 10 days, before 22 February 2019.

At the initiative of the European Center for Legal Education and Research, a group of 25 Romanian and international NGOs tackling human trafficking has brought this case into the international bodies’ attention by sending off a public petition:

To: M. Jean-Claude Juncker, President of the European Commission

RE: Organised criminals let off in Romania! Organised crime wins as the Romanian Justice System lets off a network of human traffickers the UK and Romanian police were funded to entrap

HUMAN TRAFFICKING ON THE RISE IN ROMANIA.

When justice for those who are vulnerable dies, civil society must stand up for democratic legal institutions!

The current state of human trafficking and organised crime in Romania is threatening its citizens and their fundamental rights. Tens of thousands of Romanians are tortured and exploited all over the world with the complicity of the Romanian authorities. The criminal justice system set up to fight transnational organised networks seems to be on the brink of collapse in Romania.

On the 12th of February 2019 – after about 9 years of trial with 53 public hearings in which none of the parties in the trial was heard as the court postponed 52 of them and in one decided to change the measures against offenders from arrest to court supervision for only 60 days – the court decided to acquit the 26 offenders (who headed the network) that were prosecuted in Romania and to lift the seizing order applicable to their goods and assets. The prosecutor can appeal the court decision in 10 days (before 22 February 2019).

This case was the first to involve an EU Joint Investigation Team on human trafficking against one of the most violent European criminal networks acting in many EU countries and labelled by Europol as ‘one of the largest human trafficking rings in Europe’. It was funded by the European Commission and national governments with many millions of euros. The investigation led to a change in EU law and the adoption of Directive 36/2011. During the transnational investigation, 1087 children were identified as being exploited outside Romania. The UK authorities estimated that for each exploited child the network’s profit was £160,000/year. Victims identified in UK were exploited for at least 2 years, with the youngest being only a few months old.

Based on these facts and many other similar cases that are not effectively handled by the Romanian authorities,

Having in mind Romania’s obligations under the international conventions that it is part of,

Looking into the competences of the international and national bodies responsible for transnational cooperation against organised crime,

We believe that the TIME TO ACT TOGETHER IS NOW!

Therefore, we, the undersigned NGOs, call on the European Commission to make Romania responsible for its obligations under EU Accession Agreement that states:

„Chapter 24: Justice and Home Affairs (Point 7) – Develop and implement a coherent multi-annual strategy against crime, including concrete actions to reduce Romania’s status as origin, transit and destination country for human trafficking victims and provide annually reliable statistics on how this criminal phenomenon is being controlled.”

4. Official Website of the Court (restitution of the case to the prosecutor for restoring the indictment, 3 January 2013) – http://portal.just.ro/43/Lists/Jurisprudenta/DispForm.aspx?ID=1017&fbclid=IwAR3BzGxiVzjuN2O-7PkMXHMz3qsf0LaFgjuPyx5aLQsFFA8YdTIK3cIZV5A

6. Operation GOLF (one of the 4 investigations, December 2007- December 2009) https://ec.europa.eu/anti-trafficking/eu-projects/operation-golf-–-uk-and-romanian-joint-investigation-tackling-romanian-organised-crime_en

3. Save the Children Romania