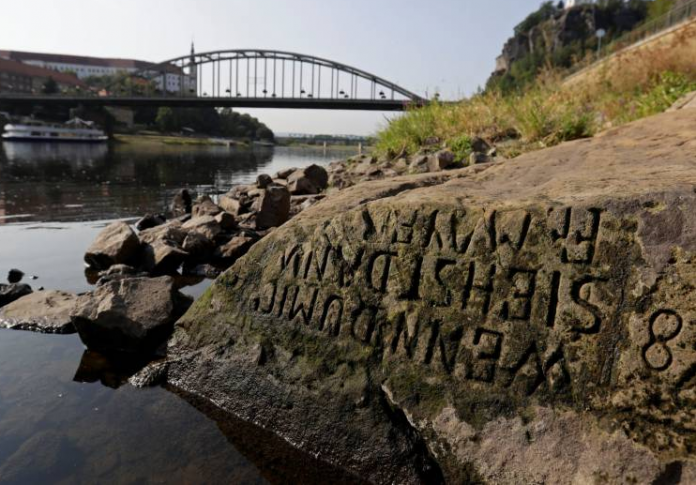 The particularly hot weather and the conditions of extreme draught in Europe have brought to light terrible warnings from the past.
Associated Press recently wrote that in the riverbed of the Elba in the Czech Republic have resurfaced the giant stones known as „the hunger stones”, which have indicated over time, the coming of hard times.
„When you see me, weep”, is written on one of these stones, which seems to be considered the best hydrological benchmark in Europe. The inscription is in German and dates back to 1616.
A detailed analysis of the stone inscriptions was published by the Czech researchers in the „Climate of the Past” magazine in 2013 (author’s note: „Droughts in the Czech Lands, 1090-2012 AD”, April 2013).
As was to be expected, the consequences of the extreme draught periods have been the destruction of crops, the food shortage, accompanied by the accelerated price increase, and hunger for the poor.
Aside from the draught of 1616, the Elba stone in the Decin city also contains inscriptions from 1417, 1707, 1746, 1790, 1800, 1811, 1830, 1842, 1868, 1892 and 1893.
In a recent article in Nature the extreme draught periods in Europe over the last 250 years have been compared, and the conclusion that the author was that „the periods of draught in the 21st century were extreme, but they haven’t been as lengthy or massive compared to the historical one”.
American analyst Martin Armstrong, who has built an extraordinary database of historical data, which has approached the subject on his blog, and has observed that there is a correlation between solar cycles and the periods of extreme draught.
According to data from the Royal Observatory of Belgium, a low of the median number of sun spots of the last 200 years, calculated for a movable period of 11 years (author’s note: the median duration of solar cycle), was recorded at the end of the 19th century, when a concentration of the appearances of the „hunger stones” is noticed.
NASA estimates show that the low of the current solar cycle will be seen in 2020, when was also seen a significant intensification of the volcanic activity on a global level.
All of this makes Martin Armstrong to claim that we are in fact heading towards a period of steep climate cooling over the next few years.
For now, Europe is faced with a draught that is threatening the crops and the survival of farmers, especially in the northern and central part of the continent.
At the end of July 2018, The Guardian wrote that „farmers in northern and central Europe are faced with the destruction of cultures and bankruptcy, amid the most intense regional draught of recent memory”.
Later, Le Monde showed that farmers in Northern Europe is faced with an acute shortage of roughage, which then manifested in Germany and Sweden, but also in France and Great Britain.
The draught in Great Britain is the worst in the last 80 years, whereas Sweden last went through a similar draught 50 years ago.
Under these circumstances, food prices will increase significantly in the coming period.
After the recent reactions, both from the authorities and from farmers, it seems nobody was prepared for this kind of extreme phenomena, and the solution was of course the launching of calls for state aids and the promise they would come.
But is financial aid the solution? Not in the opinion of professor Friedrich Heinemann, the director of a department at the Center for European Economic Studies (ZEW).
Heinemann recently wrote that „the offering of new subsidies for German farmers is a mistaken decision”, as „German agriculture already receives 5 billion Euros a year from the EU”, and „farmers aren’t asked to do much for that money”.
In the opinion of the German professor, these amounts should be more than enough to cover the damage, and the new aid would only „create false incentives for farmers”.
Why? Because the aid for covering the losses „sends a wrong message, that profit from the good years belongs to the farmers, whereas the losses are socialized”.
Professor Heinemann also points out that „several economic sectors need to deal with major fluctuations in sales and prices, as well as structural changes, without benefiting from state aids”.
As European farmers have been receiving subsidies for tens of years, „they have come to be considered a right”, the German professor further writes, and this year’s draught should be used by the authorities to „introduce some real reforms of the agricultural policy in the EU”.
Unfortunately, the chances of something like that happening are null and void. The biblical parable of the seven fat cows, eaten by the seven thin cows, was completely forgotten.
Back then, the pharaoh of Egypt followed Joseph’s advice and adopted a prudent policy, which allowed saving the people from death in its phase of decline of the economic cycle.
Now we maybe need a harsh lesson, both for the citizens as well as the authorities, because otherwise the lessons of history can’t be learned, not even temporarily.
„In the end, we could come to the conclusion that we are nothing but a stone at the bottom of the ocean, which doesn’t understand what’s happening above”, says Martin Armstrong at the end of his analysis concerning the appearance of the „hunger stones” in Europe.