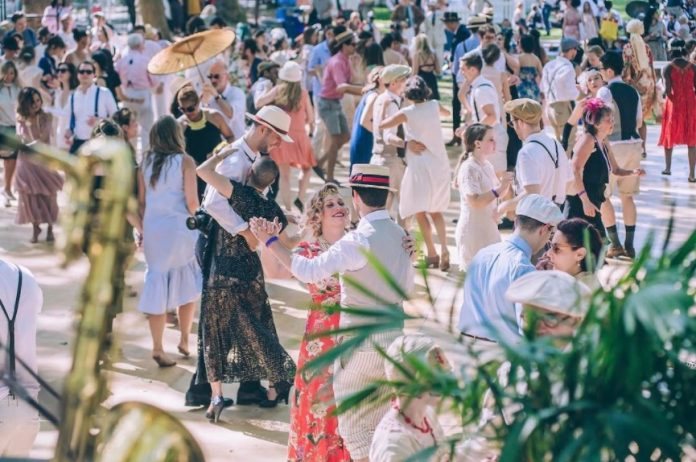 Can you imagine anything more delightful than sailing from Manhattan, and heading for an uninhabited island filled with the ghostly remnants of a deserted army base; and once there, to step back in time to an authentic lawn party from the Jazz Age ? To dress in white linens, sip exquisite cocktails, and dance the afternoon away under the summer sun, to the sounds of a live orchestra straight from the 1920s? For four weekend days in New York, such an elegant event is entirely possible! The Jazz Age Lawn Party has been the swinging, well-dressed highlight of the summer calendar since 2005, held amidst the idyllic surroundings of Governor’s Island. “I can’t think of a more delightful way to spend a weekend in the city”, remarked Bill Cunningham, the late, legendary fashion photographer for the New York Times; and Messy Nessy Chic whole heartedly agrees! Governor’s Island can be found just 800 yards off the coast of southern Manhattan, but it is a world unto itself. It had once guarded entry into New York harbour, but for many decades, the old army base lay silent and abandoned. Empty Colonial Revival houses that were once home to officer’s quarters lay alongside now unused churches, silent parade grounds, an old theatre and a castle fort. For most of the year, the island was inaccessible to the public, but recent summers have seen this tranquil sentinel guarding the lower Manhattan skyline turned into an increasingly used arts space. And its most popular event is the world’s largest, and most original, prohibition era inspired, swinging lawn party. At the heart of all this swish and sophisticated splendour, is the event’s creator, Michael Arenella. We caught up with the musician, singer, orchestra leader, and all round well dressed gentleman, to discuss 1920s jazz, men’s style from the era, and the Lawn Party currently enjoying it’s twelfth year. The Clover Club is one of Brooklyn’s most elegant cocktail spots. Panelled in dark wood, and with a cocktail menu as extensive as its contents are well made, Arenella sings and plays here every Wednesday. We’re meeting Arenella as he wraps up a photoshoot at the Club for a line of bespoke suits made for him by legendary men’s wear designer, Alan Flusser. In person, Arenella is equal parts Clark Gable and Bix Beiderbecke, with a smooth, crooning voice that makes his “Midnight, the Stars and You” feel as if Al Bowlly had survived the Blitz, and had magically reappeared on a midweek evening in Brooklyn. “The first lawn party in 2005 was a chance occurrence”, explains Arenella. “I was hired to play an event on the island, simply looked around me and became enamoured with the setting. It was such a special place removed from the city.” A conversation with the island’s groundskeeper and superintendent saw Arenella soon host a small lawn party for friends, family, and fellow jazz aficionados. The swinging, picnicking afternoon rapidly grew to became one of Manhattan’s most glittering events in the summer diary, and today it draws thousands of well-heeled revellers to the island. But for Arenella, the music comes first. “I’m first and foremost a musician. I’ve been collecting records since I was a child, old records were how I developed my love of jazz.” Starting with the trombone aged just six, Arenella developed a style that draws upon seminal trombonist Jack Teagarden, with the English ballroom sophistication of Ray Noble.

At the Clover Club, Arenella sings and plays as a three piece, but the Lawn Party offers the rare opportunity to enjoy the lush sound of a full jazz orchestra, playing tunes transcribed by Arenella himself from the original recordings. “Everything you’re hearing at Governor’s Island is one of a kind”, explains Arenella.

But hand in hand with his love of old music, is a dedication to the style and elegance of the band leaders of the era. “I wanted to learn about the surrounding elements….what made the musicians of that era tick, what was their daily life, what were they eating, how were they getting around?” And particularly, what were they wearing.

Searching for clothes that evoked the heyday of male elegance of the 1920’s and 1930’s, Arenella recently teamed up with legendary designer and author Alan Flusser.

Flusser, who dressed Gordon Gekko in Oliver Stone’s iconic Wall Street, was once one of Pierre Cardin’s head designers, and who for many years had a custom design shop in Saks Fifth Avenue, and is a lifetime member of the Best Dressed List. For the man-about-town who likes to dress well, Flusser’s custom tailoring shop is at the top of the list. The suits designed for Arenella are inspired by the Savile Row drape cuts made famous by two icons of the elegant gentleman; the Duke of Windsor and Fred Astaire. And for Michael Arenella, who’s dedicated search for authenticity in his music is mirrored by his appearance, the collaboration is a match made in sartorial heaven. “We’re excited to make clothes for a man who not only appreciates their tailoring provenance but who also wears them so stylishly”, explains Flusser. The partnership was the brainchild of Alan Flusser Custom’s most recent hire, the menswear writer and videographer Andrew Yamato. Tasked with promoting the brand, Yamato immediately thought of his friend Arenella. Yamato himself is part of a small circle in New York who like to dress from a bye-gone era. “I’ve been going to the Jazz Age Lawn Party since 2008”, he explains. “The Lawn Party has always provided a safe and consequence-free environment to let indulge one’s inner vintage dork – hats, spectators and all!” For men like Arenella, Flusser and Yamato, this isn’t about ‘dressing vintage’, but a dedicated adherence to simple enjoyment in dressing elegantly. And it is this embracing of all things swish and sophisticated that is at the heart of the Jazz Age Lawn Party. This year’s last Jazz Age Lawn Party of the summer will be held on Governor’s Island on August 26th-27th. So put on your finest white linen suit or beaded flapper dress, for there’s no more magical place to be in the city.