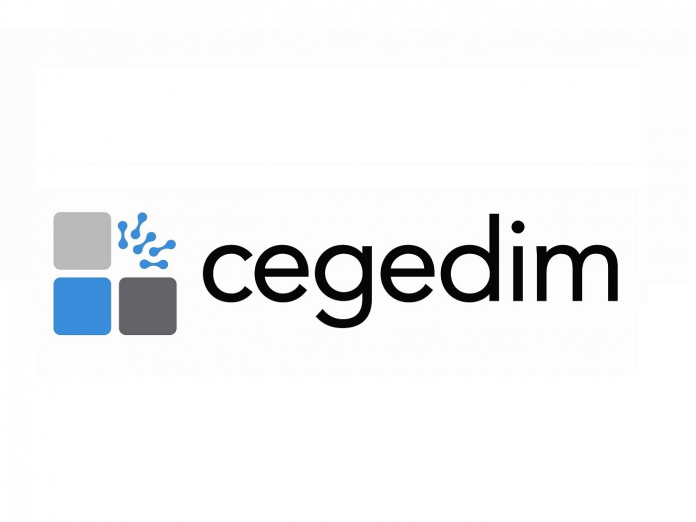 According to Pharma & Hospital Report results, Cegedim Customer Information estimates that between October 2017 and September 2018, the volume of medicines dispensed to patients in Romania was of 602.3 mn units, increasing by 5.5% as compared to October 2016 – September 2017, the total number of treatment days being as well on the rise (6.2%).

The value of medicines dispensed to patients in Romania was of RON 15.23 bn, wholesale price level, up by 11.3% in comparison to October 2016 – September 2017. By isolating the impact of cost-volume-result (CVR) and cost-volume (CV) programs, the value of Rx medicines in pharmacies increased by 8.7%.

Pharma & Hospital Report, a reference study for the pharmaceutical market research, is being performed in Romania since 1996.

In the 3rd quarter of 2018 the total volume of the medicines dispensed to patients reached 148.4 mn units, up by 4.7% as compared to the 3rd quarter of 2017, this increase being sustained by both the retail channel, which advanced by 4.4% and also by hospital (10.6%). By segments, the increase rates in volume were of 3.9% for Rx in pharmacies and 5.3% for OTC in pharmacies.

In the 3rd quarter of 2018, the total value of the medicines dispensed to patients reached RON 3.75 bn, keeping stable (0.3%) as compared to Q3 2017. Drugs related to cost-volume and cost-volume-result contracts evolved in opposite direction, i.e. the drugs related cost-volume increased by 80.8% and those for cost-volume-result contracts decreased by 75.8%. By segments, the increase rates in values were -5.0% for Rx in pharmacies, 12.9% for OTC in pharmacies and 10.3% in hospitals.

Isolating the major impact of the cost-volume-result programs and to a lesser extent, the cost-volume ones, with a total of RON 1.24 bn, the rest of retail Rx market increased by 8.7%, as compared to October 2016 – September 2017, up to RON 8.84 bn. 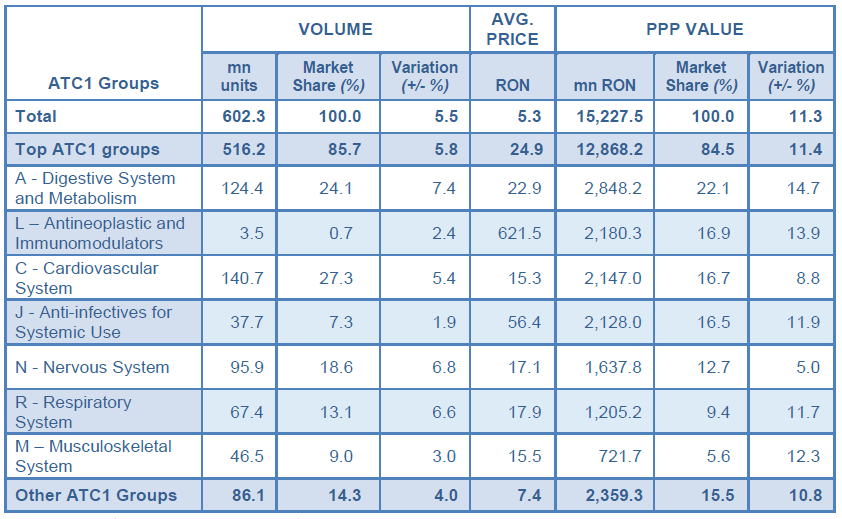 In volumes, the structure of the top 10 corporations in the recent 12 months doesn’t change, as compared to the previous quarter, the first position being occupied by Sanofi (including Zentiva) with 67.8 mn units, followed by Sun Pharma (including Terapia) with sales of 53.5 mn units, and Servier (including Egis) with 36.1 mn units.
The top 10 players is filled up by Krka (34.1 mn units), Antibiotice (31.8 mn units), GlaxoSmithKline (28.3 mn units), Alvogen (including Labormed) with 25.2 mn units, Novartis (including Sandoz) with 22.9 mn units, Gedeon Richter (21.6 mn units) and Biofarm (20.7 mn units). 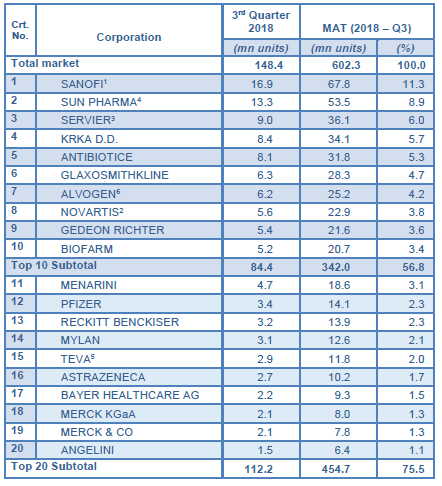 Top 20 Corporations by Value – MAT (2018 – Q3) – (October 2017 – September 2018)
The structure of the 3 leading corporations from a value point of view, in the recent 12 months doesn’t change, the first position being occupied by Abbvie with sales of RON 1,147.4 mn, followed by Sanofi (including Zentiva) with RON 1,095.5 mn and by Servier (including Egis) with RON 683.6 mn. The climb of Abbvie Corporation is due mostly to the increase of products used in interferon free treatment for hepatitis C. 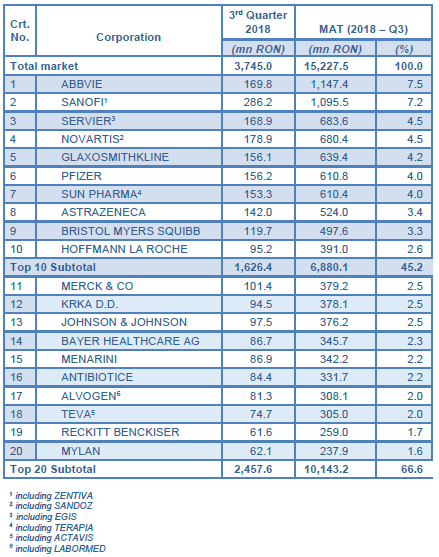 NB: This data estimate pharmaceutical products dispensed from pharmacies to patients, the estimation of the above values and market shares being made in pharmacy purchase prices. These data do not constitute information about the turnover and profit margins of drug manufacturers present in Romania, nor can they be extrapolated to this, due to the specific internal market regulation framework.