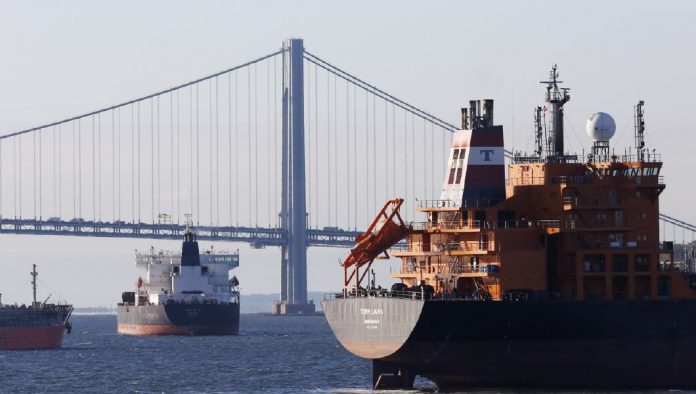 Demand for U.S. crude oil is rising for the second year since Congress lifted the nation’s 40-year ban on oil exports, but so is the nation’s need for imports.

„When we passed the bill to allow crude oil exports for the first time since the mid-70s we intentionally did it with as few strings attached as possible,” said Rep. Joe Barton, R-Texas, the vice chairman of the House Energy and Commerce Committee, in an interview with the Washington Examiner. Barton was a key proponent in lifting the export ban in December 2015.

„We said let’s let markets operate, and they’ve done so spectacularly,” he said.

Other data show the U.S. hit a record of about two million barrels per day in late September, according to the Energy Information Administration, the data analysis arm of the Energy Department.

„I was insistent that we have free markets and allow willing buyers to interact with willing sellers,” Barton said.

U.S. oil is finding its way to more destinations following the removal of restrictions on exports. The amount of crude oil being exported and the number of destinations for those exports both increased, according to the Energy Information Administration.

The U.S. exported crude to 27 countries in the first half of the year compared with 19 a year ago, EIA said.

But amid all the elation over the growth in oil exports, energy security proponents point out a reality: The U.S. is still importing a lot of oil.

In fact, the Energy Information Administration data showed oil imports have risen over the last two years after a steady drop over the last decade.

„I think people should really focus in on the net export number,” said Jonathan Chanis, senior vice president of policy at Securing America’s Future Energy, a group formed from industry and former military leaders focused on reducing U.S. dependence on oil as a matter of national security. The „net export-import number is much more important,” although „it’s a number that doesn’t look nearly as good.”

The export-import number is improving „but at a very, very slow pace,” Chanis said. „The imports are still very, very high, and it’s not going to drop precipitously at any time soon.”

But becoming a net exporter of crude is not the entire point of lifting the oil ban, according to Barton. Exporting has a geopolitical effect that is starting to take effect by displacing oil from OPEC, the international cartel that includes a number of the world’s largest nationalized oil companies, such as Saudi Aramco.

„We’ve effectively taken price control away from OPEC and put it in the hands of the market, which means primarily private producers in the United States,” Barton said.

„It’s not just the oil production side of it, it’s the market and finance side of it,” he said. „We let the banks and the private equity market, private credit market, work with producers … to finance it.”

Barton said it „is probably the untold story of how resilient our production has been in the face of OPEC trying to undermine the U.S. producers.” The ability of the oil sector to work with the U.S. financial sector through hedges and loans enabled drillers to turn a profit, even with low oil prices at $50 per barrel, Barton said.

Barton said that and a number of other reasons are giving the U.S. an advantage over OPEC producers, especially in the Asian market.

„We’re pushing OPEC players in Asia for a number of reasons,” he said. First, the quality of U.S. shale oil is better. „Most of the oil we are exporting is the lighter, shale oil that is not the heavier oil like you get from Mexico and perhaps some parts of the Middle East,” Barton said.

Second is „contract sanctity,” where „people know if they have a contract with an American company, it is going to be honored,” he said.

Third, the „nimbleness of our oil sector compared to OPEC,” he continued. „OPEC is primarily government-run, or heavily government-influenced. And their oil ministers and oil companies have a political, a national interest component that our oil companies don’t,” Barton said.

The oil ban was instituted by former President Jimmy Carter to ensure U.S. supplies of oil would be in place in the wake of the Middle East oil embargo.

Now, with the ban gone, and the U.S. a major crude oil producer, one of the effects of shipping oil abroad is eliminating a country, or group of countries, from using energy commodities as a geopolitical weapon.

The Trump administration’s energy dominance agenda touts the U.S.’s ability to use energy exports as a way to create a more secure supply chain to Europe, South America, Asia and most recently Africa, where the administration is looking to establish energy inroads.

Although the administration often promotes the idea of the nation becoming a net exporter of natural gas, crude oil exports are part of creating a reliable hedge against higher cost fuels and more volatile supplies from countries known to close the spigot for political reasons. The U.S. currently exports more natural gas than the nation imports.

Chanis said Trump’s energy dominance agenda presents an opportunity to affect the global market in a way that benefits U.S. energy security. Beyond the export-import imbalance, the geopolitical and market influence the U.S. has gained from ending the crude oil ban is one of its most significant results.

„Every barrel more that we can produce in the U.S., we potentially displace a foreign barrel overseas in the global market,” Chanis said. „If we’re a middle-cost producer, which is what we are, and we can push out high-cost producers, the world benefits and we benefit.”

„We reap the economic benefits and the security benefits” from U.S. exports pushing down the price of oil globally, he said. And with increasing imports, Chanis said, increased domestic production of oil helps make the nation more secure.

Changing the market in Asia is where the battle over market share likely will play out next year.

Oil exports will begin to shift dramatically toward filling demand from Asia, according to Thomson Reuters.

China is becoming the biggest source of that demand for U.S. oil. Even though crude oil exports to Asia are still relatively small, at less than 300,000 barrels per day, it is still 10 times higher than last year’s totals, according to Thomson Reuters Oil Research and Forecasts.

„Demand from Asia in particular has been rising. It’s responsible for a lot of demand growth we expect this year globally for oil from China and India,” Shakil Begg, the head of Oil Research at Thomson Reuters, told the Washington Examiner.

One of the big reasons for the increase in demand for U.S. oil is the OPEC agreement to cut oil production through next year to try to raise the price of oil to at least $60 per barrel. The oil glut that started two years ago from a massive influx of oil and reduced demand from the U.S. had depressed oil prices.

Many OPEC and non-OPEC members such as Russia, which rely on oil to support their national budgets, have been suffering since prices fell below $100 a barrel a few years ago.

Begg said the production cuts have made U.S. oil exports more attractive in Asia, where OPEC members, especially in the Middle East, sell much of their oil.

„Some of the cutbacks, although they have not be targeted towards Asia, have also affected the supply going to the Asia market,” Begg said. „As a result, we’ve seen some price dislocations. So, Middle East crude is a lot more expensive than it used to be.”

This has made buying outside of the Middle East „a lot more attractive,” he said.

But that is just the tip of the iceberg, considering that oil exports could hit nearly 3 million barrels a day, some reports predict.

Begg said his forecasts for U.S. oil have been much less bullish, adding that current reports of 2 million barrels per day are on the high side.

Oil exports are more in the range of 1 million per day, according to Begg. He said growth next year faces some uncertainty mainly from China as new environmental rules kick in to make cleaner fuels.

The older „teapot” refineries in China have been driving much of the demand for U.S. crude there.

But if the bulk of the refineries close due to new environmental restrictions, it could harm exports, Begg said.

„It’s likely to put a ceiling on how much of their demand growth continues longer term,” Beg said.

At the same time, China’s requirements for cleaner fuels will require the lighter oil that U.S. produces. So, it could boost U.S. exports, he said.