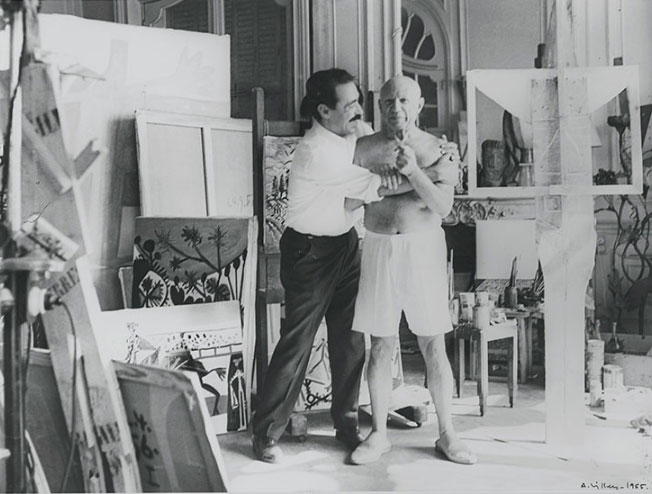 The man who dressed Picasso

As Michel Sapone created hundreds of garments for Picasso, he became an intimate friend. Other artists, from Joan Miró to Zao Wou-Ki, also sought out the humble Italian — and paid him with their art. An exhibition at Christie’s Paris tells his uplifting story

In photographs of Nice’s arts scene taken between 1950 and the early 1970s, one face emerges again and again. Immaculately dressed, with a moustache so full it entirely obscures his upper lip, the tailor Michel Sapone hovers in the background — the unlikely confidante of artists including Alberto Giacometti, Hans Hartung and Pablo Picasso, to whom he was particularly close.

Now, an exhibition at Christie’s Paris is shedding light on Sapone’s remarkable life, featuring more than 100 documents, archival photographs and original artworks, received as payment for dressing some of the 20th century’s greatest artists. ‘We thought it was time to place Sapone centre stage,’ explains Tudor Davies, Head of Impressionist and Modern Art in Paris, of a project that ‘has never been attempted before’.

Sapone received his first artwork in exchange for a suit made for Florentine artist Manfredo Borsi. Although the tailor later claimed, ‘I had never looked at a painting in my life; I looked at women,’ Borsi’s unconventional payment method soon took off. As news of Sapone’s work travelled around Nice, he found himself dressing a growing circle of artists, each new garment resulting in a new artwork that was dedicated to him and his family.

‘I had never looked at a painting in my life; I looked at women’ Michel Sapone

It was Sapone’s relationship with Picasso, however, that became his most meaningful and enduring. ‘Sapone was introduced to Picasso by two other artists when he arrived in Nice in 1948,’ explains Davies. ‘It became immediately obvious that the two of them had a connection: they were both from the Mediterranean, and they shared the region’s temperament. They spoke of its landscapes; of places they had visited as children.’

In Sapone, Picasso found someone who shared the same approach to his work. ‘Picasso sought to strip things away; to create art that got to the bare essentials. There was something of that in Sapone’s tailoring,’ says Davies. According to Luca Masia, author of Il sarto di Picasso (Picasso’s Tailor), Sapone dressed Picasso for 16 years, producing more than 100 jackets and 200 pairs of trousers — always without the artist’s direction.

‘[Sapone] was quickly able to “size up” someone’s character, using it to inform the clothes he made,’ Davies continues. One of the first garments he created for Picasso was a pair of striped trousers ‘à la Courbet’ — an homage to Gustave Courbet’s Autoportrait au col rayé. Other garments included a Cubist-style shirt that the artist would wear only in private, and outfits engineered to lengthen Picasso’s diminutive frame.

Although his clothes referenced many of Picasso’s greatest artistic influences, Sapone himself had little knowledge of the art world. ‘He grew up in a poor working-class family, but had an innate sense for what was beautiful,’ Davies reveals. ‘The artists in Nice were the first he’d met, and he felt a great curiosity for the way they created. He built up a knowledge of art, not through a formal education, but through his exchanges with them.’

‘Photographs taken at Picasso’s 75th birthday show him wearing an amazing striped velvet coat, which was a present from Sapone’

If Sapone was captivated by his artist clients, they appeared just as interested in him. ‘Sapone was discreet; he was someone who operated at the edges of things,’ says Davies. ‘I think that’s why artists gravitated towards him, not just as a tailor but as a confidante.’ This trust occasionally manifested itself in unexpected ways. ‘The exhibition includes a letter from Zao Wou-Ki, who asked Sapone to look at a piece of land and advise whether he should buy it.’

The unusual request was emulated by artist Hans Hartung, who asked Sapone to source a piece of land that he might use as the site for his ‘ideal house’. ‘Those who asked favours of him never seemed ill at ease when doing so,’ adds Davies. ‘Of course he received things in return, but people trusted him; there was never a sense that he was out to make a profit.’

Indeed, the artists Sapone dressed had much to be grateful for; adept at working for big personalities, his outfits allowed their wearers to create and project an identity. ‘A lot of the artists he worked with were self-promoters. Picasso, in particular, was keen to dress in a way that made him look impressive, and asked Sapone to source clothes that would make people say, “Wow, where did you get that?”.’

Among Picasso’s more eccentric requests was a kilt, bought not because he had Celtic heritage but because he like the idea. A photograph, featured in the Paris exhibition, shows the artist wearing a giant Yugoslavian-style mountain coat, purchased directly from the country by Sapone. ‘It had masses of embroidery and was completely over-the-top. Picasso wore it as though he were King of Yugoslavia,’ says Davies.

Other outfits became central components of major events. ‘Photographs taken at Picasso’s 75th birthday show him wearing an amazing striped velvet coat, which was a present from Sapone. Picasso put it on right away and wore it for the whole day,’ Davies continues. ‘Sapone’s clothes were incredibly distinctive; I think Picasso liked that as it helped him to project this larger-than-life personality.’ 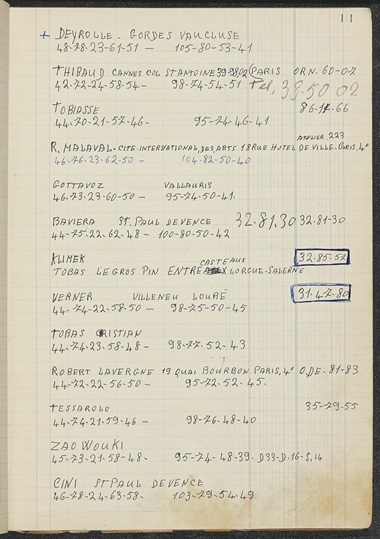 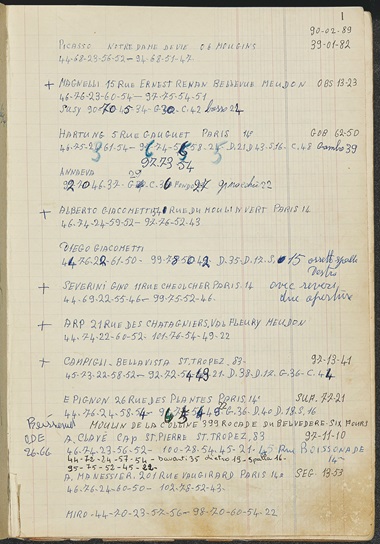 As Sapone amassed artworks, the walls of his shop became covered. ‘He hung art in the changing rooms — there’s a photograph of Sapone reflected in one of the mirrors, surrounded by hundreds of framed works.’ Also featured in the exhibition is Sapone’s original workbook, recording the measurements of clients including Picasso, Miró and Alberto Giacometti — the latter being famously tall.

Personally addressed to Sapone, much of his art offers an insight into the relationships between the tailor and his clients. While admitting that ‘it’s a little bit rude,’ Davies’ highlight is a portrait by Picasso, dedicated to the ‘Bandito Sapone’ on 1 April 1960. ‘Picasso drew the tailor with a big fish, but made it exceptionally phallic. We’re exhibiting it next to a photograph of Picasso laughing as he drew, and Sapone, responding to the finished work. It captures the great camaraderie between them.’

As Picasso grew older, Sapone became one of his closest acquaintances. ‘He reached a point where he didn’t really need to meet people and Jacqueline [his last wife] restricted access to him,’ says Davies. ‘The Sapones were low-key. The family would come over with a big dish of pasta on Sunday and they would have lunch together. Sapone might give the artist a shirt he’d made, and they’d spend the afternoon together’.

That near-familial connection, says Davies, is ‘why we’re doing the show. We want to show that art is about connections between people. To enter into a relationship with an artist, you don’t necessarily need to be highly cultured. Ultimately, artists are interested in humanity; if they find that in you, then art can spring from that. Sapone is a great example of that.’

In 1972, Sapone’s art became the foundation of Galerie Sapone, founded by his daughter and son-in-law, Aïka and Antonio Sapone. Continuing Sapone’s legacy in the city that became his home, the gallery became a means of supporting artists including Hans Hartung, Alberto Burri and Alberto Magnelli. The tailor from a poor working-class Italian family had, unintentionally, become a key link between the artists who defined the art of the last century.