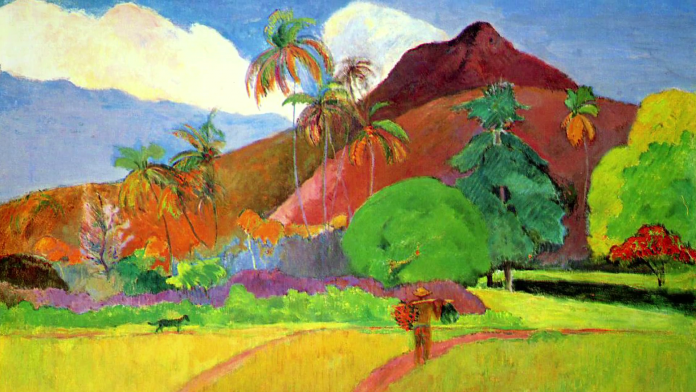 When he fled Paris for Tahiti in 1891, the artist described a ‘dazzling’ encounter with a landscape and way of life that changed his painting for ever — as an exceptional painting from our 28 February sale demonstrates.

‘Everything in the landscape blinded me, dazzled me… life each day became better.’ When Paul Gauguin travelled from Paris to Tahiti in 1891, he discovered a world rich in colour. Writing in Noa Noa, his account of the journey first published in 1919, he described a sensory assault of ‘soft purples, deep blues and startling bursts of orange and yellow’ set among ‘delicate strokes of greens of all hues’. The island’s landscape felt all the more vivid against a background of intense, humid heat.

A highlight of Christie’s Impressionist & Modern Art Evening Sale  on 28 February, Gauguin’s Te Fare (La maison) was painted in 1892 during the artist’s first visit to Tahiti. It was a period that witnessed a burst of creativity which resulted in some of his most celebrated and influential work. In 18 months, Gauguin produced more than 60 paintings, pushing away from the ‘timidity’ he perceived in his European works to create richly coloured, experimental landscapes, imbued with a sense of mysticism. It has been suggested that the wooden hut in the composition could be Gauguin’s own rented home in Mataiea. 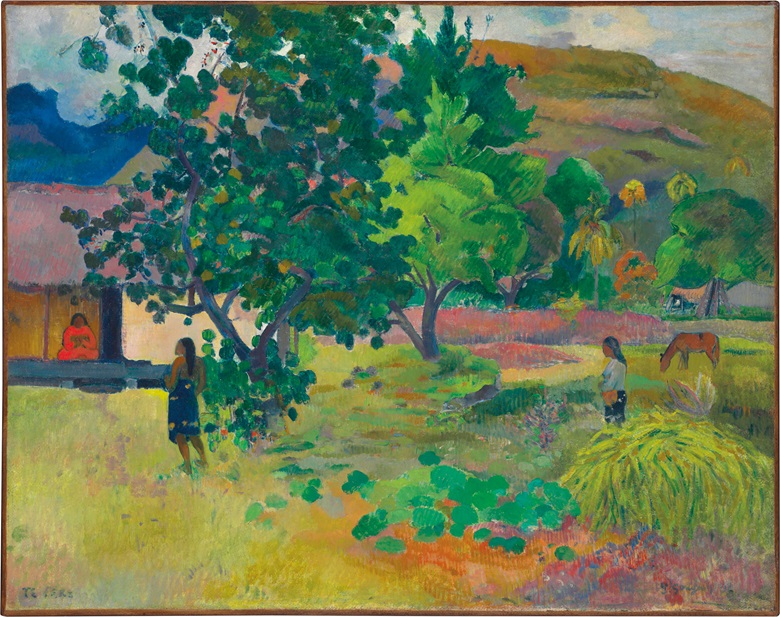 Key to Gauguin’s new style was the culture of Tahiti’s islanders, whose lives — to the European outsider at least — appeared blissfully uncomplicated. In Paris, Gauguin had lived in abject poverty, his personal life plagued by turbulent relationships with other artists and his own family. Tahiti provided a welcome contrast. ‘I envied them,’ he wrote of the islanders. ‘I looked at their happy, peaceful life round about me, making no further effort than was essential for their daily needs, without the least care about money. To whom were they to sell, when the gifts of nature were within reach of every one?’

Situated in a landscape that is both real and imaginary, the figures in Te Fare (La maison) capture the sense of still and silent wonder that the artist found in Tahiti. A recurrent motif in his works of 1892, the solitary, seated figure on the veranda is joined by two figures that appear to be waiting or listening. ‘It is really life in the open — an intimate life all the same, among the thickets and the shaded brooks; these women whispering in an immense palace which Nature herself has decorated with all the riches that Tahiti holds. Hence the fabulous colours, this fiery, yet soft and muted air.’

As he stayed in Tahiti, Gauguin began to adopt a simpler lifestyle. ‘In the end, I understand the language quite well, my naked feet, from daily contact with the rock, have got used to the ground; my body, almost always naked, no longer fears the sun; civilisation leaves me bit by bit and I begin to think simply,’ he wrote. ‘Every morning the sun rises serene for me as for everyone, I become carefree and calm and loving.’ In Tahiti, Gauguin found an existence comparable to that of ‘the first man and woman in Paradise’.

Lessons from the Roman Empire about the danger of luxury